Difference between revisions of "1569: Magic Tree" 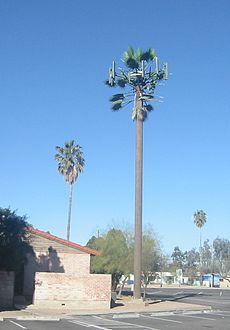 This comic features a running theme in the XKCD comics, Beret Guy's naive and/or odd ways of thinking. In the beginning of the comic, Beret Guy shows Megan what he believes to be a tree, and explains that it grew there because he placed magic beans in that spot yesterday. This is a reference to the fable "Jack and the Beanstalk", where the protagonist plants several magical beans he acquired, resulting in a beanstalk growing which ascends into the atmosphere. Megan, however, tells Beret Guy that the "tree" is actually a cell phone tower. Beret Guy disagrees, pointing out that it has branches, to which Megan tries to explain that this was in an attempt to make the towers look like trees. She gives up, however, as Beret Guy has already begun climbing the tower.

Later, Megan complains that her cell reception was nonexistent. Beret Guy responds by saying that he had to cut down his "tree" because there were "scary giants with yellow hats" (referring to technicians on the cell tower) in it. This mirrors, again, the "Jack and the Beanstalk" fable, where the protagonist has to cut down his beanstalk to prevent the giant, whose lands the beanstalk connects to, from climbing down and chasing him. In reality, the "giants" were probably utility workers.

Convergent evolution deals with multiple species acquiring similar characteristics to fulfill their role (such as eagles and owls having similar claws). The title text explains that, over time, trees would start to look more like cell phone towers in order to avoid people cutting them down, as cell phone towers are rarely cut down at all; this is called facetiously "convergent evolution". In reality this scenario is more similar to mimicry, where a creature mimics the appearance of another, in order to confuse predators. In this scenario, the more defenseless trees attempt to mimic cell phone towers, which have the defense of people not wanting to cut them down or they would lose cell service (and likely a significant amount of money through fines). This is similar to the counting pine, a tree in Terry Pratchett's stories that evolved to display its age in hopes that humans would not cut it down and count its ring. See also 1498: Terry Pratchett.

(Beret Guy and Megan stand next to a large pole with a note on it.)
Beret Guy (Pointing at pole): Check it out! I threw my magic beans on the ground here yesterday, and this big tree appeared!

(Zoom out, the pole is revealed to have branches. Around the pole are trees about 1/9th of the height of the pole.)
Megan: That's a cell tower.
Beret Guy: No way - it has branches! See? I'm gonna climb it!

(Same as frame 1. Beret guy has now started climbing the pole.)
Megan: No, they just put those there to make it look- ...Never mind.

(A caption above the frame says "Later...")
Megan: Why do I have no signal?
Beret Guy (Holding axe): There were scary giants with yellow helmets in that tree! Luckily I cut it down before they ate me.

Explanation may benefit from adding that cell phone tower appearance has evolved to be more treelike. [Comet] 05:07, 26 August 2015 (UTC)

It's not Batesian mimicry

Evolutionary biologist here: it's not Batesian mimicry. It's mimesis.

Cell phone towers evolved to look like trees to defend themselves against people who would object to their presence on grounds of visual blight. http://www.wired.com/2013/03/dillon-marsh-invasive-species/ [Comet] 22:41, 26 August 2015 (UTC)

I think that cell towers do have defenses. When you wound them, they start emiting utility workers, policemans and lawyers. (I'm sure the operator will get message if BTS is disconnected.) -- Hkmaly (talk) 12:49, 26 August 2015 (UTC)

At the time of this comic, there was a website devoted to cell towers that were camouflaged to look like trees. The site was FraudFrond.com and had several euphemisms for them. Fake firs, sham shrubs, bogus botanicals, and my favorite, counterfeit conifers.

I don't if it is relevant but there is an old MSX game called magical tree that displayed the tree in side view in a very similar way. http://www.mobygames.com/game/msx/magical-tree ZeroA4 188.114.98.202 (talk) (please sign your comments with ~~~~)

The third paragraph needs amending. "...attempt to mimic cellphone towers" implies conscious evolution, and the reference to the tower's "defenses" is a relic of the Batesian mimicry reference. What I'm guessing is happening (I'm not an evolutionary biologist) is that trees with a slightly more towerlike appearance are slightly less likely to be cut down by predatory Beret Guys, and will survive to pass similar traits onto their offspring, and over millions of years certain lineages of celltowertrees will increasingly resemble treecelltowers built by humans in turn to resemble them. The claim that this is a "standard textbook example of convergent evolution" is tongue-in-cheek more than facetious; a real example of it ought to be used rather than the Terry Pratchett reference, which seems to illustrate conscious evolution.141.101.99.108 17:00, 26 August 2015 (UTC)

Randall's original transcript (no changes by me) is this:

[Beret guy excitedly points to a pillar about a meter across. There's a sign on the side. Beret guy is pointing it out to his friend, Fancy Haircut]
Beret: Check it out! I threw my magic beans on the ground here yesterday, and this big tree appeared!

[Now in silhouette we see the pillar is several hundred feet tall, covered in antennae, and the figures are as ants in its shadow.]
haircut: that's a cell tower.
beret: no way-- it has branches! See? I'm gonna climb it!

[Beret guy begins to shimmy up the side of the pole. Somehow. With impressively powerful thighs I guess.]
haircut: No, they just put those there to make it look-- ...never mind.

[Later...]
haircut: Why do I have no signal?
beret, with an axe: there were scary giants with yellow helmets in that tree! luckily, I cut it down before they ate me.