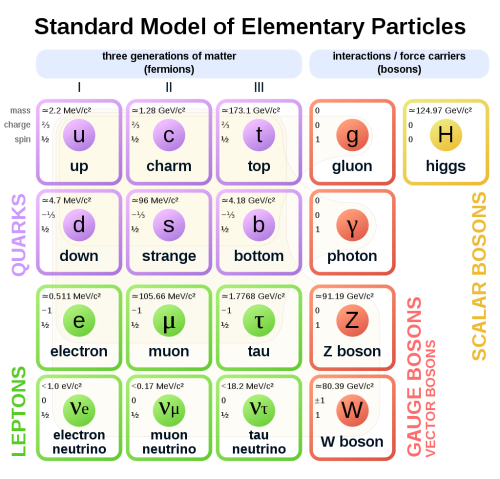 This comic consists of a normal version of the particle table to which Randall has made substantial alternations and additions, which are drawn in red over the black and white table.

While the Standard Model's predictions are very well supported by experiments, the physics community has identified several flaws in it (e.g. it lacks any particles to convey gravity), and so lots of research is committed to searching for "Physics beyond the Standard Model". Some of Randall's changes are sort of intended to fill some of those gaps, but for the most part they are nonsensical (although not quite as much as the Turtle Sandwich Standard Model or Fixion).

In reality, the original quark model proposed by Murray Gell-Mann included only three quarks, with the "strange" quark so named because the particles that contained them were strangely long-lived relative to their masses. The "charm" quark was so named when it was proposed because it brought a "charming" symmetry to the weak interaction, which we now understand is because it completes the second generation of quarks, along with the strange quark. When a third generation of quarks was proposed, they were called top and bottom by analogy to the up and down quarks (which are so named because of the isospin they carry), though the names 'truth' and 'beauty' were briefly in competition, and colliders working with B quarks are sometimes even now called "Beauty Factories".

While Randall leaves two leptons, the electron and the muon, untouched, he has opted to discard the tau lepton entirely. Each of these three leptons has an associated neutrino; Randall has decided to discard all but the electron neutrino, as he has decided that three are too many neutrino types. He has also replaced the standard symbol for the neutrino, the Greek letter ν (nu), with a capital N, in order to avoid confusion between ν and v, the two letters appearing similar, though this might further be confused with nucleon (particle physicists commonly use N to denote "proton or neutron", and excited states of nucleons are given the symbol N, followed by the mass in parenthesis[1]) or possibly even with the symbol for Nitrogen (the atomic nucleus with 7 protons and a similar number of neutrons, encountered more in radiology/chemistry as an N, 7N, 14N, N+, N2 and other variations).

In place of one of the neutrinos, Randall has introduced a new elementary particle that supposedly explains the existence of dark matter. The nature of dark matter is one of the most famous mysteries in physics: galaxies seem to have much higher gravity than their detectable matter would account for, yet this mysterious form of matter does not seem to interact with other matter in any other detectable way. Neutrinos are known for rarely interacting with other matter, due to their lack of charge, which could justify Randall's decision, but even the little interaction that neutrinos have with the weak force rules them out as candidates for dark matter. Hypothetical sterile neutrinos could be the source of dark matter, and also for the small but nonzero masses of the familiar neutrinos, but no such particles have yet been identified. Together with the arrow, the only one in the comic that points at the particle's box rather than the symbol, the triumphant exclamation "We found it!" probably means that the new "dark matter" entry in the table is the dark matter particle.

Randall proposes several new names for existing particles. First, that the W and Z bosons should be renamed to the charm and strange bosons, respectively (taking the names from the quarks), and second, that the Higgs boson should be named the Vin Diesel boson, as he considers Peter Higgs's name to be too boring to be given to a particle. The Higgs boson is known in the popular press (to the chagrin of many physicists, including Higgs) as "The God Particle", which is certainly a flashy name, but which itself was changed by the editors of the book of the same name from its authors' originally-intended title: The Goddamn Particle.

Randall inserts the graviton, a purely theoretical particle, noting that its inclusion is "probably fine". While the graviton has never been observed, it is occasionally included in diagrams of the standard model to show its hypothetical place, which likely convinced Randall to do the same. Here it is shown below the Higgs boson, implying to be a scalar boson, though it is theoretically a 2nd-order tensor boson (with a spin of 2) and is usually given its own column.

Randall also proposes that a false decoy "Magic" particle should be added to the Standard Model, to trip up promoters of quantum mysticism. Presumably, anyone who invokes this particle to support their claims will expose themselves as a fraud, much as cartographers will print trap streets on their maps to catch plagiarism.


e electron, connected to the electron neutrino below.
µ muon, connected in faded gray to the muon neutrino below, with red rounded corners cutting it off.
τ tau, connected to the tau neutrino below, in faded gray with a red scribble over it. On the tau lepton is a red note which reads,
No one needs tau leptons
Z Z boson, with the Z symbol and the Z in the name in faded gray. The symbol has a red s written over it and the Z in the name is scribbled out in red. The word strange is written in red between the symbol and the name.
M magic, in red with a red border. To the right is a red note with an arrow pointing to the magic particle, which reads,
Decoy particle for people making nonsense claims about "quantum" philosophy stuff

Title text: Bugs are spin 1/2 particles, unless it's particularly windy.

Honestly, I'd vote to change every nu in physics to something else since its so damned hard to write differently and read lazily.

There is no president. Changing names is probably ok, but if you want to change the physics like with removing of neutrinos, you need to talk to God. -- Hkmaly (talk) 23:41, 27 August 2020 (UTC)

It's a bit weird that he added left/right since most of the particle already come in left- and right-handed chirality.

Comic 2240 has a "cool bug epoch" in the expansion of the universe that could be linked from the "cool bug" particle in this comic. ----

The explanation says that the cool bugs particle goes into the scalar boson group, which isn't right because there isn't such a group here. Vin Diesel is a scalar, but the general agreement is that graviton has spin 2 (and for this reason it's also not really correct to move it to the gauge boson group). The group is more accurately called the everything else group. 162.158.202.110 11:22, 27 August 2020 (UTC) anon

I posit the reason for "left, right" being in the order they are (instead of the more logical "right, left") is due to the Konami code being up, up, down, down, left, right, etc... SiliconCarbide (talk)

The Right/Strange description box included this: "What's strange is how Randall assigns the charm quark the left and the strange quark the right, when so many languages have it the other way around. But since when has Randall cared?" Which is not at all clear. What is it that languages have what other way around? I moved it because it is so vague to seems meaningless. If it was a useful observation, please clarify so somebody who doesn't know what it means already can understand. 162.158.106.244 17:32, 27 August 2020 (UTC)

"Randall apparently considers magic to exist and be a particle, both of which are blatantly false." - but both the text of the comic and the sentence immediately after this one clearly state that it is intentionally inaccurate, so this seems like a strange claim to make. 172.69.34.156 01:59, 29 August 2020 (UTC)

This is the first time I have seen an explainxkcd that blatantly and intentionally lies in the explanation. Jokes are common, especially the 'citation needed' meme. But your supposed to do that without any lies. Someone please fix it (especially the bug section) to be a funny, but accurate explanation as per the norm. 108.162.237.226 17:37, 30 August 2020 (UTC)

I misread the right-most vertical caption [in the explanation's chart] as "secular bosons" and didn't understand what the religious beliefs of seaman have to do with the rest. These Are Not The Comments You Are Looking For (talk) 09:18, 5 October 2020 (UTC)

Neutrinos naturally undergo flavor-changing oscillations, so the idea of getting rid of the extra generations is more reasonable than it seems at first. Electron neutrinos change to mu and tau neutrinos in flight and vice versa. Mentioning this simply because I didn't see anyone else mention it. See https://en.wikipedia.org/wiki/Neutrino_oscillation