Difference between revisions of "312: With Apologies to Robert Frost" 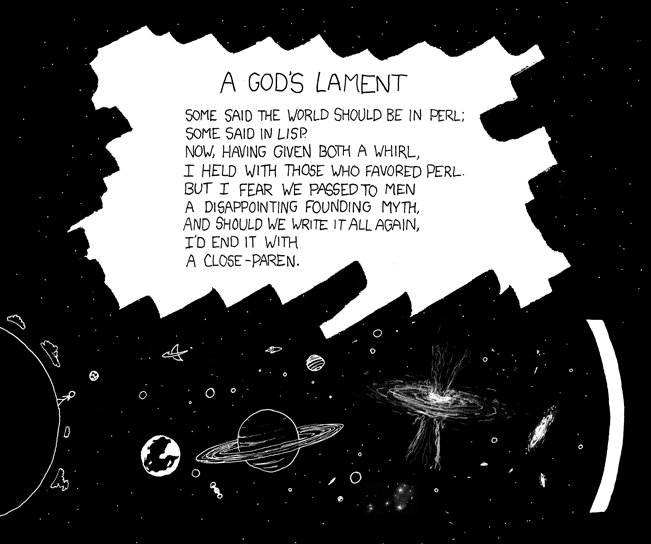 Some say the world will end in fire; some say in segfaults.

This comic presents a poem about a god's dilemma of whether to create the world using Perl or Lisp, two popular computer programming languages. The god has chosen to write it in Perl but since then appears to lament the choice, apparently expressing that if given the chance to write the world's code again, he or she or it would use Lisp instead.

The grammar of Lisp as a language requires the programmer to use a multitude of parentheses, and in many cases it can be difficult to determine whether all of the parentheses have been properly matched up to one another. In fact, Lisp programs will often run, possibly incorrectly, even if there are mismatched parentheses or parentheses missing where they should be present, and so, many Lisp programmers will simply throw extra close-parentheses at the end of their programs to ensure that they do not have too few. The last two lines of the poem refer to the plentiful parentheses in Lisp. The image at the bottom of the panel shows a close-parenthesis at the end of the Universe.

A segmentation fault, also commonly called a segfault, is an error that occurs when a computer program attempts to access computer memory to which it should not have access.

This comic might possibly be alluding back to comic #224, in which one of "the gods" claims that although the Universe may appear to have been written in Lisp, it was actually written mostly using Perl.

The poem itself and the title text are a parody of "Fire and Ice," written by Robert Frost and first published in 1920. In this poem, the speaker discusses his stance in the debate on whether the world will be destroyed in fire or in ice. "A God's Lament" has a rhyme scheme that is nearly identical to that of Frost's poem. However, it differs in that "Lisp" does not rhyme with "men," "again," and "paren," while the corresponding four lines in Frost's poem do rhyme.