Difference between revisions of "Talk:1781: Artifacts"

Though this is really fascinating idea, I think that it is not completely correct. You would need to define outliers in each dimension separately. If you's use n-dimensional distance, the points will be all roughly equidistant from the mean. --162.158.134.106 10:42, 5 January 2017 (UTC)
I think therefore that "One way to have a data set composed entirely of outliers would be a data set with N points, in an N-dimentional space, where each point is zero for every dimension except one, unique to itself.[1] All these points are equidistant from each other." should be removed from the text. In an equidistant data set, no point is an outlier.--162.158.134.106 10:50, 5 January 2017 (UTC) 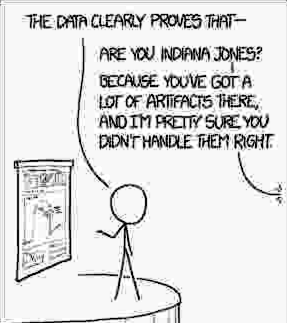