Explain xkcd: It's 'cause you're dumb.
(Redirected from 1400)
Jump to: navigation, search 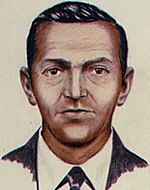 This comic points to similarities between several details of Cooper and Wiseau's stories:

The comic then compares an FBI sketch of Cooper with a photograph of Wiseau, apparently to claim that they have similar appearances. The only real similarity is that they're both wearing sunglasses.

However, these are only a few cherry-picked aspects of their lives, and do not seriously suggest that they are the same person. For example, even if we assume that Wiseau was born in 1950, and that Cooper was only 35 (probably the youngest age which can be mistaken for mid-40s) in 1971, that leaves a 14-year gap between their ages. Likewise, Cooper was said to have either an American or Canadian accent, while Wiseau's bizarre accent is certainly not North American. While Cueball's theory in this comic is clearly a joke on Randall's part, given Randall's known distaste for conspiracy theories, this may also be making fun of people who base theories off of minor details while ignoring contradictory ones and bigger-picture questions. The question in the title text, for instance, notes that Cooper would have gone through a huge amount of effort just to produce a movie; a similar rhetorical device is often used against convoluted conspiracy theories, where one points out a vastly simpler way for the supposed conspirators to have accomplished their goals.

The title text goes on to attribute such a weird motive for hijacking to the impression that "people are very strange these days," which is another quote from The Room.

[Cueball is using a baton to point towards a projector.]
D.B. Cooper
("Dan Cooper")

Hijacked a plane in the 1970s.
On landing, demanded money and
parachutes. Jumped from plane
mid-flight and was never found.

[Cueball has his palm out.]
Tommy Wiseau
("Johnny")

Wrote, directed, and starred in
The Room, a film widely hailed as
"The Citizen Kane of bad movies."

Offscreen voice: This is the dumbest theory I've ever heard.
Cueball: But it explains everything!!

"Citizen Kane" as a reference point here is more meaningful that that. Apart from being a landmark film, "Citizen Kane" was also made by a movie-newbie at that day, namely Orson Welles, who not only played the title role, but also directed, co-wrote and co-produced the movie, very much like Wiseau did with his landmark film; the only significant difference thus being "Citizen Kane" the best and "The Room" the worst movie ever made. 141.101.88.223 13:14, 30 July 2014 (UTC)

"In 1971, a man referred to by the media as D. B. Cooper hijacked a Boeing 727 and escaped with the contemporary equivalent of over $1 million in ransom money."

(A lot of people think definition no. 2 is the only definition, but it isn't.)

I appreciate your work to improve the explanations here. But, such theatrics over a one word edit are unnecessary. lcarsos_a (talk) 02:14, 29 July 2014 (UTC)

Yeah - or Australian, or Inuit, or African, or South American or any other accent that's not from a cultural/language group primary to Europe (and definitely not North American [clear from the context of the sentence]), but more specifically, not any European form of English (so, perhaps, Icelandic, Polish, Czech, Bulgarian, and many other possibilities) which might be hard for an untrained listener to specifically identify as anything but "European". Many languages have commonalities due to geographic proximity, not only in terms of accent, but also syntax and vocabulary, which would modify the learners' ability to accurately acquire and render a foreign language in the same ways. That is, someone who natively speaks Portuguese and someone who natively speaks French will have similar troubles in learning subtleties of American English but which would contrast from those troubles encountered by someone who's native language is Hindi, Tagalog, or Yoruba. Brettpeirce (talk) 13:41, 29 July 2014 (UTC)

Nice try, but the real Dan Cooper wouldn't have used an alias that shared his last name. That's the kind of amateur mistake that always leads to discovery & arrest, but the real guy was pretty damm sharp and one hell of an operator to pull it off. Not that this guy didn't tell his niece he was D.B. Cooper; just that he never told her he was kidding...

Not to deny or confirm that, but the Wikipedia article on D.B. Cooper states that 9,710 of the bills are still missing (290 bills were found in Washington State wilderness in 1980). If one does not spend the money one holds (because even if it is to be invested or laundered, someone will notice the serial number(s) and report it; the numbers are now available online, not to mention the look of old bills; the average replacement rate for US bills is about two years, so seeing a large bundle of slightly-peculiar looking 1970s-era bills may engender a slight sense of difference), one will not have enough to make an independent film, because money is only useful to us when it is used. PS. I'm sorry for the length of this comment, but it's just getting all the details ironed out and fixed down - my apology is just making the comment longer? OK... 108.162.249.225 (talk) (please sign your comments with ~~~~)

I have to ask: was the use of the inappropriate French word "baton" (stick) in the transcript a deliberate joke about European mangling of English? A native speaker of American English would write, "pointer". Nitpicking (talk) 12:21, 7 December 2021 (UTC)

To bring a native British English perspective to this (whether we do "European mangling of English" is a problematic suggestion in at least two distinct ways!), I'm not sure I'd call it a "baton" - which is something a conductor would use to guide an orchestra or a relay-runner would carry along their share of a running track - but not a "pointer" either. A "laser pointer" would be a pointer, but comparatively modern.
At school (long ago enough to have blackboards rather than whiteboards) I'd call the held stick what it often was, outside its life as pointing object. So often it was either a ruler (30cm/1ft for most, perhaps a 1m/1yd stick for the ambitious or exuberant gesticulator) or, occasionally, the rubber (i.e. the "Board-rubber", the chalk eraser; and youthful innocence/ignorance and local vocabulary meant we never ever thought of that word as meaning a condom!) possibly being held on the off-chance that it was needed to be suddenly thrown at a disruptive or inattentive pupil - as it often ended up being.
The alternative of the day (transparencies on OHPs) would be to cast the shadow of the felt-tip pen used to scrawl upon the horizontal acetate sheet being shone up and across onto the projector screen.
My only experiences in the post-whiteboard world, save for those business-sized paper-pads and those thick marker pens ('sharpies', though not yet well known by that pseudo-brandname), is to call it a cursor, because it is a projected desktop with a mouse cursor doing the job of pointing. When it isn't a form of shadow-puppetry with the bare hands of the lecturer being made to cast some form of pointy shade upon the output. 141.101.99.20 23:55, 7 December 2021 (UTC)