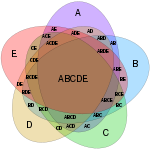 In the title text, Randall declares that he will start intentionally using term combinations that don't appear in the above diagram, presumably to ensure every intersection contains at least one term.

[A Venn diagram with five sets titled 'Big', 'Little', 'Large', 'Small' and 'Great'. Various words which can be prefixed by these titles are shown in the relevant segment.]