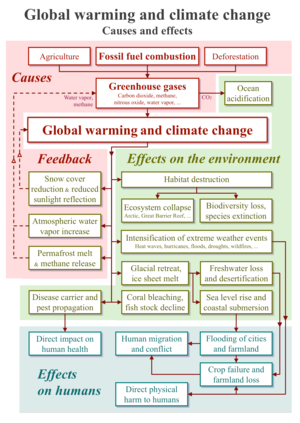 Climate change, especially global warming or generally pollution of the environment is a recurring theme on xkcd. General scientific consensus agrees that climate change and global warming are real (and so does Randall). However, plenty still believe the conspiracy theory that global warming is a hoax. Randall has tried to call attention to it several times, most directly in 164: Playing Devil's Advocate to Win, 887: Future Timeline, 1321: Cold and 1379: 4.5 Degrees. Just a few days after this category was created the most elaborate attempt by Randall to show exactly how serious Global Warming is was released with the huge 1732: Earth Temperature Timeline. And he used his 2500 comic anniversary to call attention to it once again 2500: Global Temperature Over My Lifetime by showing that the average temperature has increased more than half a degree during his lifetime (less than 40 years at the time of publication) and that this was predicted by the oil industry before he was even born.

In some of the comics only the word climate change is mentioned, either in the title text as in 603: Idiocracy, or just as part of a crazy sentence, 1412: Teenage Mutant Ninja Turtles.

Also comics discussing pollution that could cause climate change (without mentioning it directly like 1659: Tire Swing) should be included in this category.

But comics, where people are just guessing in the explanation that Randall may be referring to global warming etc, should not be included here.

The following 13 pages are in this category, out of 13 total.