Difference between revisions of "503: Terminology"

This comic shows a map of the world. The X in the center, labeled "ME", indicates Randall's approximate location in the U.S., and two arrows point west and east from it. The map uses a format, popular in America, which places the American continents centrally, therefore splitting Asia, (parodied by "you-cut-asia-in-half"). The comic then shows Europe labeled "The West" as it is commonly referred to, despite being located to the east of Randall, and Asia similarly labeled "The East", despite being west of Randall. Randall is therefore annoyed with the common terms "the West" and "the East" referring to locations east and west of him respectively.

"The East" and "the West" were defined in geographical terms from the traditional boundary between Europe and Asia. They were later expanded or (mis-)appropriated to include references to cultural, political, and trade connections. Another east-west division comes from from zero longitude (the prime meridian): the Western Hemisphere and Eastern Hemisphere are defined in reference to it, and world maps are often centered on it. The fact that it runs though London, England, is an artifact of the British Empire's dominance -- and British exploration of the world -- in the 1700s and 1800s. In particular, British astronomical tables (made by the Royal Observatory in Greenwich, London) were widely used to determine longitude all over the world.

In short, "the East and "the West" should simply be viewed as a reference to map coordinates and not as relative to where you are as suggested by the comic. An America-centered map does not redefine "the East" or "the West" anymore than an Australian up-side-down reversed map redefines "the North" or "the South".

The convention of orienting maps with north at the top and west at the left was started by the Greek geographer Ptolemy. In his work Geography he introduced the first coordinate system with latitude and longitude. Randall shows some other possible map orientations in 977: Map Projections.

The title text comments on the similarity in shape of New Zealand and Japan, and suggests that one may in fact be the other in disguise. The similarities are partly explained by both forming as volcanic island chains. 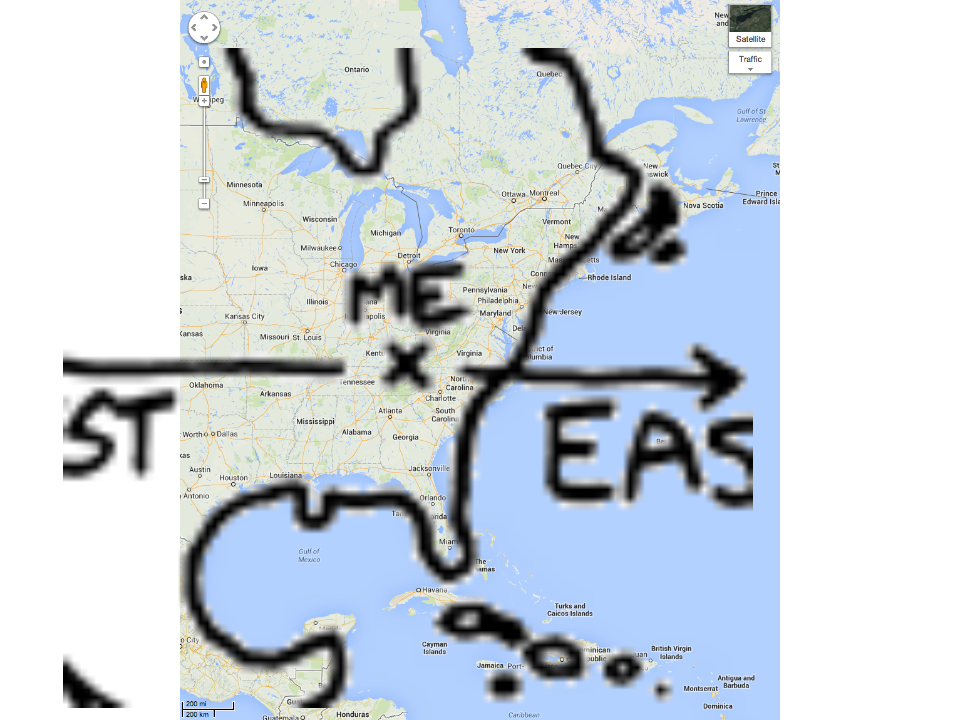 [Map of world with North America centered. An "x" is placed near east coast. Asia is labeled "The East" and Europe "The West."]
"The East" <- West x (me) East -> "The West"
This always bugged me.

Well, sitting in Europe, the East is in fact east and the West is in fact west of me. It's just a term made from an European point of view and has settled over time. The main problem is that east and west should be used as relative directions but are used absolute. (Contrary to north and south which can also be used absolute). --83.243.48.2 12:18, 30 April 2013 (UTC)

I'm still accustomed to the use of the Pacific Ocean as the geographical split, centralising the Atlantic Ocean. However, since the UTC boundary sits east of the Atlantic, perhaps the East and West hemispheres should be reversed to match.

So what? The International Date Line sits within the Pacific. Also, for the reasons mentioned above (east and west being relative), I would refrain from using the terms eastern and western hemisphere. --SlashMe (talk) 14:17, 25 September 2013 (UTC)

It's not only point of VIEW. Our civilization is based in Europe. Europeans first discovered and then conquered rest of world (doesn't matter if the people already living there wanted to be discovered or not). "West" is what was discovered when sailing to west from Europe, "east" is what was discovered when sailing to east. Americans (especially citizens of USA) sometimes forget they are (mostly) NOT native of America, but immigrants from Europe.

Well, as a European this has bothered me as well. After all, the American East coast is to the West of us... while the West coast is far closer to China than to Europe (i.e. far closer to the East than to the West). I tend to confuse the two a lot... As a compromise, I suggest calling all three coasts the East/West coast to resolve any and all confusion and ambiguity. --162.158.88.212 10:36, 18 April 2018 (UTC)

Randall comments on how New Zealand and Japan look similar, and the superhero comparison made is... Spiderman? Spiderman wears a costume that covers his entire body. Superman would be far more fitting. Changing this.
-Sensorfire (talk) 02:25, 15 August 2018 (UTC)