Difference between revisions of "896: Marie Curie" 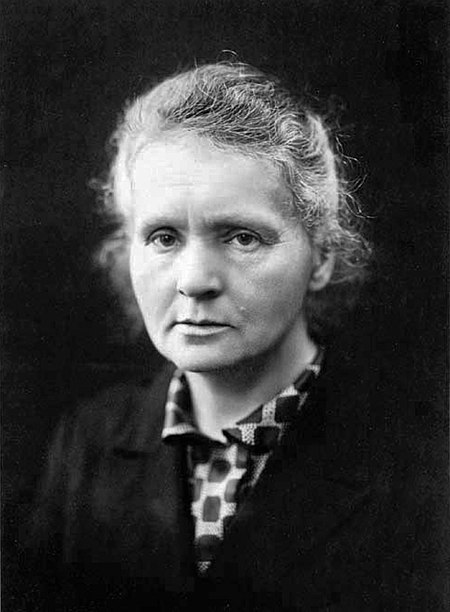 Ponytail is standing (possibly by herself and talking to herself) and looking at a picture of Marie Curie. When she mentions Marie Curie's name, Zombie Marie Curie comes forth to give some life lessons and inspiration. Marie Curie tells Ponytail that she shouldn't only look up to only her as a famous woman scientist, and gives examples of other great women scientists, Lise Meitner, one of the major contributors in the discovery of nuclear fission, and Emmy Noether. Zombie Marie Curie tells Ponytail that she shouldn't look up to somebody to be that person, but to strive for greatness instead, as there are other people like her striving to reach their goal as well.

Marie Curie pioneered research on radioactivity and as it says in the comic, she earned two Nobel Prizes. She died from aplastic anemia contracted from exposure to radiation. The title text says that it did not kill her permanently, since she came back as a zombie.

[Zombie Marie Curie is walking towards Ponytail.]
Zombie Marie Curie: Not that I don't deserve it. These two Nobels ain't decorative. But I make a sorry role model if girls just see me over and over as the one token lady scientist.

[Close up of Zombie Marie Curie.]
Zombie Marie Curie: Lise Meitner figured out that nuclear fission was happening, while her colleague Otto was staring blankly at their data in confusion, and proved Enrico Fermi wrong in the process. Enrico and Otto both got Nobel Prizes. Lise got a National Women's Press Club award.
Zombie Marie Curie: They finally named an element after her, but not until 60 years later.

[Zoom out to both Ponytail and Zombie Marie Curie.]
Zombie Marie Curie: Emmy Noether fought past her Victorian-era finishing-school upbringing, pursued mathematics by auditing classes, and, after finally getting a Ph.D, was permitted to teach only as an unpaid lecturer (often under male colleagues' names).
Ponytail: Was she as good as them?
Zombie Marie Curie: She revolutionized abstract algebra, filled gaps in relativity, and found what some call the most beautiful, deepest result in theoretical physics.
Ponytail: Oh.

It would probably be better if she came back as a ghost. But radiation poisoning in pop lit only explains physically supernatural stuff, not external consciousness supernatural stuff. Zombies, on the other hand, have been used in pop lit as thinking characters, even though they shouldn't have been. 108.162.216.31 16:49, 3 December 2013 (UTC)Dartania

Does it not escape your notice that by simply saying "everything else she says is true as well" you are doing the exact thing that this cartoon is trying to emphasise as unfair? In the last cartoon you guys couldn't say enough about the great Richard Feynman but you have reduced the achievements of two great women down to one simple sentence. Well played, I'm sure Randall's proud that you could so clearly see the point he was trying to make. 141.101.98.94 07:37, 2 February 2015 (UTC)