This comic strip is a tip, specifically the first science tip. As with most of Randall's tips, it is technically interesting for some applications but not very practical.

A log scale is a way of showing largely unequal data sizes in a comprehensible way, using an exponential function between each notch on the y axis of a graph. So for example the first on a Y axis of a graph using a log-10-scale would be 1, then 10, then 100 and 1000 for the fourth. A log/logarithmic function is the inverse of a corresponding exponential function. A log-scale version of the chart in the comic would look like this: 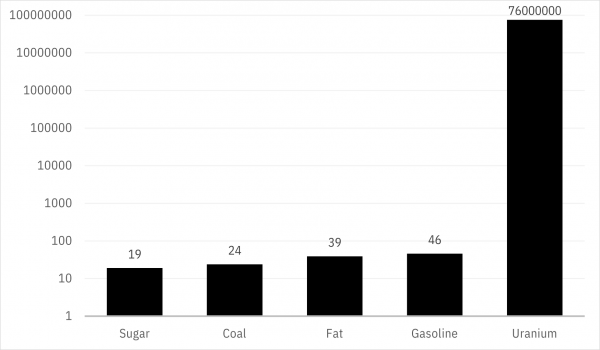 The log scale can also be abused to make data look more uniform than it really is. On a log scale the energy density of uranium looks larger than that of the other materials, but not dramatically so. The joke is that if one wanted to make their point "properly," they would go ahead and use ridiculous amounts of paper to show the difference between bars using a linear scale; this method would focus more on the shock factor of the differences in question, and less on actual communication/representation of data. Cueball seems to be passionate about the MJ/kg of uranium, so he would rather demonstrate the grandeur of the data than use a more efficient scale.

See these examples for well known day-to-day measurements which are measured on a log-scale.

The title text mentions computer scientist Donald Knuth; the fictional notation is a parody of Knuth's up-arrow notation. Using paper thickness as the basis for a log scale would probably give the exponential function a very large base. However, it can be noted that Knuth's up-arrow notation can handle numbers far, far larger than this paper stack notation; for example the number 3↑↑↑3, also known as Tritri[1], very compact in up-arrow notation, would require a number of iterations pinned to the stack on the order of several trillion. 3↑↑↑↑3 , also known as Grahal[2], would require a number of iterations that is not only too large to write down, but attempting to write that number using the same paper stack notation would require printing off a second stack of several trillion iterations just to hold the number pinned to the first stack. By repeating this multi-stack repetition, you reach the limit of up-arrow notation.

It should be noted that Randall has used log scales in past comics.

[A bar chart on a piece of paper, with a second piece of paper attached to it.]
[Title of the bar chart] fuel energy density of different materials in megajoules/kg
[Values of the first 4 bars on the paper] 19 24 39 46
[The different bars for Sugar, Coal Fat and Gasoline and Uranium on a linear scale with the bar for Uranium exceeding on the attached stack of paper]
[Labels of the 5 bars on the paper] Sugar Coal Fat Gasoline Uranium
[The uranium bar on the chart goes off the page onto a huge strip of paper folded up into a stack slightly taller than Cueball.]
[Value on the top end of the paper strip] 76 000 000
[Caption below the panel:]
Science Tip: Log scales are for quitters who can't find enough paper to make their point properly.

This comic was seen in the What If? book, taken from "a certain webcomic".

The fictional notation MAY BE a parody of Knuth's up-arrow notation - and uranium MAY BE an effective energy source. By the way, labeling the energy sources just with material name is insufficient: how good energy source is hydrogen? -- Hkmaly (talk) 09:17, 18 January 2013 (UTC)

The calorie standard is defined by burning. So comparison doesn't fit with the graph as written. DruidDriver (talk) 20:46, 24 January 2013 (UTC)

It's true that uranium has an extremely high energy density, which is of great importance for mobile power plants; however, nuclear fission has a lot of safety issues, especially for mobile power, which is why it is used only for stationary power plants and large military vessels, such as aircraft carriers and subs.

Hydrogen is pretty good when highly compressed so as to get high energy volume density as well, but that leads to problems too. Also, hydrogen leaks more easily than almost anything else. That is especially a problem for an extremely flammable gas. On the plus side for hydrogen, nothing burns more cleanly.

"The log scale can also be abused to make data look more uniform than it really is, so on a log scale sugar and other materials would look largely equal energy density when they clearly are not."

I think this is missing the point, which I take to be that displaying the data on a log scale would understate the vast difference between uranium and the hydrocarbons/carbohydrates:

Uranium is clearly larger than the others, but only by a factor of 4, so the real magnitude of the difference may not be appreciated. With the stack of paper, he's proposing a way to show linear values for the data without having the uranium column simply shooting off the top of the page, with an arrow and the number. Wwoods (talk) 17:26, 18 January 2013 (UTC)

Am I the only one not seeing the glaring mistake on the comic? First thing I thought was "that stack of paper is not high enough!". Please someone double check my math: If the height has to be 6.6e6cm (stated above) at 29.7 cm each A4 (vertical), that would mean 222,222 sheets of paper one on top of another. Each stack of 100 pages is aprox 1cm high. That would represent the stack to be 2222cm high, ergo 22m, roughly a 7 story building. Unless there is the equivalent of 6 stories in the waving paper, or the length of the folding 7x that of an A4, or the stick figure is 7 times closer to the camera than the stack of paper is... THE HEIGHT OF THE PILE IS OH SO WRONG!!!!!! Please prove me wrong!

Assumption #1) the graph is drawn on an 8.5 x 11 sheet of ordinary paper in landscape orientation.

Assumption #2) the graph is drawn in normal (linear) scale.

Trusting MSPaint with the conversions, I read the first four bars to have about 5 units (megajoules per kg) per pixel. 76 million units divided by 5 units per pixel is a 15.2 million pixel tall bar.

So, the stack Cueball is looking at is too short to house an accurately long enough bar....

...IF the stack's footprint's longer dimension is only 8.5 inches. While the original graph paper appears to be 8.5x11, the ribbon of paper continuing the bar does not appear to be segmented. Again looking at MSPaint, it would seem the ribbon is about 4.75" wide. The stack is clearly much longer than it is wide. If the stack is 30" long and 4.75" wide, the stack would be whittled down to just over 6 feet tall.

So, making a gang load of assumptions, and scaling from an drawn image, it's reasonable to say the stack in the image could be accurate enough.

I actually had to present this chart when I was ten years old, but I needed to use a split level to save paper due to the theme of environmentalism.141.101.104.186