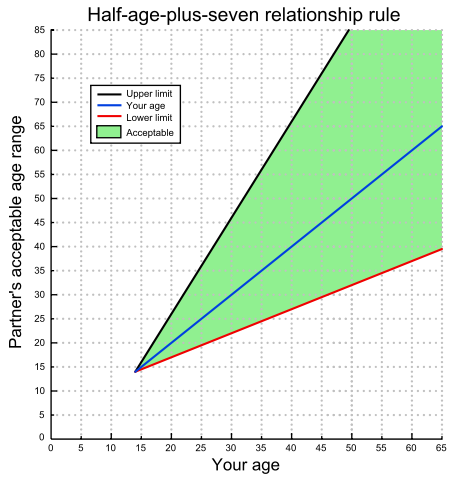 Megan is upset because she is apparently older than 26, and among people who marry, half do so below 26. The intuitive conclusion is that the number of potential partners is decreasing as time goes on.

The Half Plus Seven Rule is an unwritten rule that asserts that it is creepy to date anyone who is younger than half your age plus 7 years. For example, a 50-year-old dating someone who is younger than 32 (50/2 + 7 = 32) would be considered creepy. As the graph shows, there is a lower limit and an upper limit.

At age 14, you can only date people your own age. The same also works with infinity, but even Methuselah died once.

While the application of this rule actually reduces the number of potential matches further, Cueball presents it in a positive way by showing that there are whole swathes of people who she couldn't marry in the first place without being in a creepy relationship. But, as her age increases, the range of non-creepy partners also increases. Combined with Census Bureau data for how many people exist within any such range, Cueball shows that her eligible dating pool is in fact still increasing.

Megan notes that graph-making nerds like Cueball may have a hard time finding dates, but this is refuted by the title text.

[Megan is sitting on the ground with her elbows on her knees and her hands on her chin.]
Megan: This sucks. The median first marriage age is 26. The pool of singles is shrinking. I'm running out of time.
Cueball: Actually, not quite.

Cueball: I did some analysis of this with the Census Bureau numbers just last weekend. Your dating pool actually grows until middle age. So don't fret so much!
[The first chart is labeled "Singles" and is a decreasing graph. The second graph is labeled Dating Pool, and is a bell curve.]

Megan: Did your analysis say anything about the dating prospects of people who spend weekends at home making graphs?
Cueball: Come on. Somewhere at the edge of the bell curve is the girl for me.

The following text is exactly 160 characters long, which is the maximum length of an SMS: