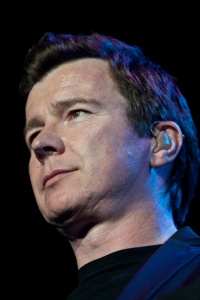 The term Trolling is used to describe provocative, destructive, or annoying behavior on the Internet. Especially common are Internet pranks of the bait-and-switch type, an example of which is Rickrolling. It involves placing a link that is supposed to contain interesting or funny material, but instead directs to the music video of the 1987 Rick Astley song Never Gonna Give You Up. The prank first occurred in May 2007 on the popular imageboard 4chan and has since become a widespread internet meme.

The comic has Black Hat and Cueball digging into the ground and splicing Black Hat's computer into the TV cables of Rick Astley's house. They are feeding the video of Never Gonna Give You Up into Astley's TV signal, who can be seen sitting in his living room and wondering why CNN has been replaced by his own video. The act of Rickrolling Rick Astley himself is declared to be a "great moment in trolling".

Also note that the comic image itself is itself a Rickroll. Anyone curious enough as to why their mouse pointer became the selection icon to click on the comic (on the original xkcd page) would find themselves watching "Never Gonna Give You Up."

Rick Astley was actually Rickrolled on reddit (at r/pics) on June 17th, 2020.

[Black Hat and Cueball are in Rick Astley's yard, hacking into his cable TV connection and replacing the signal. Rick Astley is sitting in a chair in his house, watching TV.]
TV: CNN has obtained this exclusive footage of the riot-torn-- *CZZZHT* ♫ Never gonna give you up... ♪
Rick Astley: What the hell?

[Caption below the frame:]
GREAT MOMENTS in TROLLING:
Rick Astley is successfully Rickrolled

Removed from the explanation:

>> It should be noted that in the original prank, the victims voluntarily click on the link instead of having the video forced upon them. Therefore, the scene depicted in the comic is (arguably) no Rickrolling in the classical sense. Also, since Rick Astley is not the originator of the prank, this is no pay-back scenario.

Rick voluntarily chose to watch CNN, but was interrupted by an unexpected appearance of "never gonna give you up". Sounds a lot like rickrolling to me.

I am looking at the comic on my iPhone and there is a different title text. It's simply a link leading to the Rick Roll'd video. CaptainJack (talk) 20:34, 10 October 2014 (UTC)

SOMEONE ACTUALLY DID IT: https://www.reddit.com/r/nextfuckinglevel/comments/hawahv/this_guy_just_rick_rolled_rick_astley_i_think_he/