This comic is a homage to Charles Schulz, the creator of the comic Peanuts, who was born on November 26, 1922. Both comics carry the idea that when you start thinking about your tongue, you can hardly stop thinking about it. (Similarly: if you start thinking about your breathing, you stop breathing unless you consciously think to breathe,same goes for blinking.) This is similar to the ironic process theory, where trying to not think about something will invariably make you think about it. The intention of Black Hat in this comic is for Cueball to consciously feel his tongue for the entire month of November. Since it was Black Hat's idea, Black Hat probably suffers the same consequences.

Here is the comic in question by Charles Schulz from Peanuts. 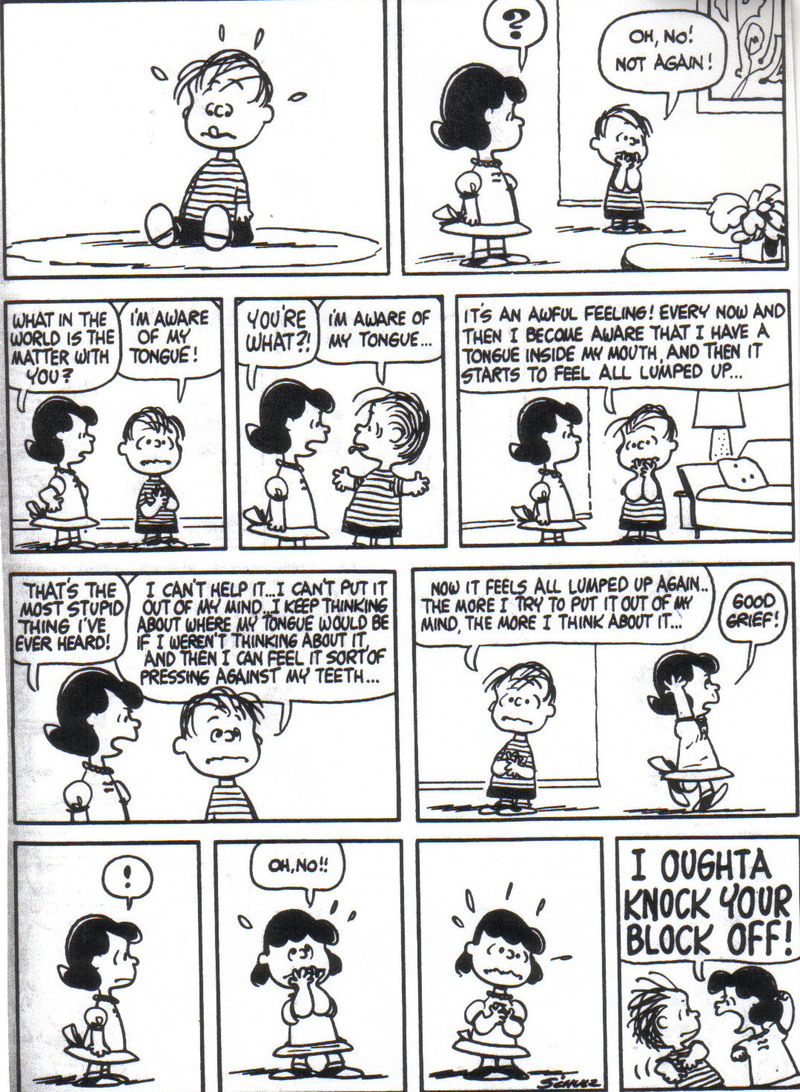 A random person on tumblr speculates that Schulz's comic has a deeper meaning about becoming conscious about one's existence in the world. This is similar, in concept, to the expression and phrase used for trolling in online communities, "You Are Now Breathing Manually".

[Black Hat and Cueball sit in a room.]
Black Hat: Did you know November is Tongue Awareness Month?

[Cueball is suddenly aware of his tongue.]

[Cueball continues to be aware of his tongue.]

[Cueball is *still* aware of his tongue.]
Cueball: I hate you.
Black Hat: Enjoy the next four weeks.

All subcutaneous nerves can feel their environment the same way our bodies can be heard, seen and smelt. Our sensory settings normally turn it into white noise for us so we automagically tune it out. Some people are born without any nerves and some never quite manage to ignore it all.

Mental process ditto. <hint>I suppose one day there could be a chart of the relatively little known illnesses (and the well known ones for that matter (e.g. tinnitus.))</hint> I used Google News BEFORE it was clickbait (talk) 18:02, 22 January 2015 (UTC)

Please justify the reason the entire peanuts comic is included in this explanation and not just a link to it. Otherwise I will be deleting it and providing a simple link and quick overview.Lackadaisical (talk) 12:46, 11 May 2016 (UTC)