In this comic, Randall has made a cartogram showing the planets in the solar system. Cartograms are a type of map in which geographic area is displayed proportionately to some secondary characteristic - in this case, population. From the title text it is clear that the population in question is human (persons) (but even if all life forms where counted it it wouldn't matter, since the only confirmed life in the Solar System is on Earth). Thus the other planets have a population of 0 and are shown as nothing more than dots. 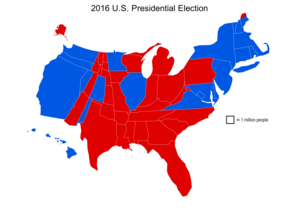 Cartogram showing the results of the 2016 U.S. presidential election.

This comic is a joke about cartograms, which are used, for instance, to show electoral representation. A standard American electoral map is very misleading. Though the split between the two major parties, Democrats and Republicans, is about 50-50, most of the area of the U.S. map is shown in the color associated with the Republican Party, red. That's because many Democrats live in densely packed districts occupying little land area, while many Republicans live in rural districts with large land area but few people. This has led to the rise of electoral cartograms in which district areas are shown in proportion to population, correcting the misimpression that most of America is conservative.

Solar system diagrams are likely also to be misleading. Illustrators are overwhelmingly forced to use a far more scaled-down spacing between planets, compared to their scaled sizes, even if they can (or care to) maintain consistency in the relative distances and/or radii on linear scales. (The huge factors of difference involved instead may lend themselves to being physically modeled to better give some sense of the spacing and sizing differences.) Here, Randall has intentionally applied the wrong solution to the problem.

Interestingly, the side of the Earth shown includes China and India, two countries that alone account for over a quarter of all humans on Earth.

The title text states that even though Randall counts every active Mars rover as a person (for sentimental reasons), they are almost nothing compared to Earth's roughly 7,900,000,000 persons. Mars therefore is still nothing more than a dot compared to the Earth. There are a total of five rovers at the time of the comic's publication; in chronological order, they are Sojourner, Spirit and Opportunity, Curiosity, and Perseverance. Only the latter two were functional at the time of the comic's publication, giving Mars a rover population of two. A third rover, China's Tianwen-1, landed on Mars on 2021 May 14, making for an all-time high of three active rovers.

Mars rovers are a recurring theme on xkcd and only a few weeks earlier, a comic named 2433: Mars Rovers was released. This is the fourth comic this year to reference Mars Rovers.

[Above a chart are two paragraphs with explanation:]
Most solar system diagrams are misleading.
This chart offers a more accurate view by showing the planets sized by population.

[Below the explanation is a list of the eight planets in the solar system. They are shown in order with labels. All but Earth show up only as dots. Earth is large and clearly drawn, with a view approximately centered on Indonesia. The spacing between the dots is equal, and the same distance as from those closest dots to Earth to Earths surface. Earth's label floats below it, while the other planets' labels connect to their respective dots with lines, with text either above or below the line of planets:]
Mercury
Venus
Earth
Mars
Jupiter
Saturn
Uranus
Neptune

How do we know, that the "graph also ignores the International Space Station"? Maybe its crew just counts towards earth’s population, since that’s the planet it’s orbiting. Bischoff (talk) 08:25, 23 March 2021 (UTC)

If the biggest Kuiper Belt object is a planet, the biggest Asteroid Belt object (Ceres) should be one too. They're both dwarf planets. Ceres was also considered a planet upon discovery until the rest of the similar-looking belt around it was discovered. Zowayix (talk) 00:24, 20 March 2021 (UTC)

The Pluto thing is just never going to go away. The IAU is in ego lock about how bad this decision was. "Clearing the neighborhood" serves no scientific value whatsoever. Supporters I've asked can't even articulate how big Pluto's neighborhood actually is. 162.158.75.106 12:55, 20 March 2021 (UTC)

There's no need of a precise definition. [1] The difference between a planet and a dwarf planet in terms of cleaning their neighborhood is like comparing a pebble to a mountain, they simply belong to different classes. 162.158.89.145 20:28, 21 March 2021 (UTC)

Does the massive amount of space junk orbiting The Earth count as "not clearing the neighborhood", thereby denying it planet status? These Are Not The Comments You Are Looking For (talk) 02:22, 23 March 2021 (UTC)

If the junk is orbiting a planet then I think it counts as having "cleared the neighborhood" otherwise anything with a moon couldn't be a planet; objects not cleared would be those with their own orbit around the sun rather than being attached to the planet's orbit. Of course I'm not an astronomer/astrophysicist, so take what I say with a grain of salt.172.70.35.17 14:14, 24 March 2021 (UTC)

Yes, interesting in the "ancient Chinese curse" way: despite most of solar system being empty, you would need to be VERY careful to fit even single planet inside without risking collision. -- Hkmaly (talk) 04:31, 20 March 2021 (UTC)

Surprised no one has gotten technical and talked about how Earth is not drawn to be 7.8 billion times larger than the others (which would be around 300,000px wide) , meaning it's still off the same way other depictions tend to be. Trlkly (talk) 05:51, 20 March 2021 (UTC)

Maybe it's a logarithmic cartogram. Log scales are generally needed when differences in sizes are so vast. Barmar (talk) 06:01, 20 March 2021 (UTC)

The dots are dimensionless, thus have zero size according to their population. Only exception is Mars, but with two it would still almost be zero size and thus just a dot. --Kynde (talk) 09:31, 20 March 2021 (UTC)
Dots are used to represent points, which are objects of size zero. The Earth and its 7.8 billion people could be any size at all and the other planets should still just be dots. (Well I guess if you scaled Earth up far enough, Mars would become bigger than a dot.) DKMell (talk) 18:31, 23 March 2021 (UTC)

Needs to be amended to note that this reflects only HUMAN life detected on these planets.  Just because we haven't found any yet doesn't mean that Jupiter might not be housing billions of Jovians, or Mars isn't teeming with Martians. RAGBRAIvet (talk) 06:53, 20 March 2021 (UTC)

Well there is no evidence of any lifeforms in the solar system beyond Earth. It talks about Persons in the title text, thus it needs to be intelligent to have that label. And thus animals would not count. So until we have evidence of aliens on the other planets, or until we inhabit them, their population would be zero. --Kynde (talk) 09:31, 20 March 2021 (UTC)

At this point, Martians would need to be very actively hiding to not be discovered. However, yeah, there are definitely places in solar system where whole civilization could be thriving without being found by us, and Jupiter would definitely be one of them. -- Hkmaly (talk) 03:10, 24 March 2021 (UTC)

No, it is not a map at all. But you could mention in the explanation that it has similarity to bad maps projections. But this one is not actually bad, it is technically correct, it is just useless. Also removed the map category as there is not map in this comic! It is a globe. --Kynde (talk) 09:31, 20 March 2021 (UTC)

At least mention that Randall has previously published several distorted maps that are actually useful. E.g. https://xkcd.com/2399/ But I think it is a map (of the solar system). Gvanrossum (talk) 23:59, 20 March 2021 (UTC)

It's a diagram. Not sure it qualifies as a map. The relationship between features (planets) is purely sequential, and (however much I use Perl's map {func($_)} @list operation, which derives more from the pure mathematical usage) I expect my maps to have slightly more than 1D of layout to them, whatever other distortions they display/don't avoid. There are indeed 'strip maps' of roads/routes pulled straight, but they are mostly called "straight line diagrams" anyway (or contour/slope diagrams using the route as the cross-section path, so 2D in a perpendicular variation). 141.101.99.207 03:38, 21 March 2021 (UTC)

Does anyone else find it strange that the title text explicitly states "although that's not enough to make Mars more than a dot." It seems in keeping with XKCD humor just to leave it at "For sentimental reasons, every active Mars rover is counted as one person" and leave the reader to consider if that had any appreciable impact on the size it was drawn at. Perhaps it truly was only a sentimental gesture, and the point of the title text is simply to express his sadness that it didn't alter the size he was able to draw Mars at. --172.69.22.36 14:27, 21 March 2021 (UTC)

Is anyone else pondering what he knows that we don't that mandate the planets even get a dot? What populations beside rovers get them represented at all? oh and do populations of moons get neglected or added to the total of their barycenter (which is usually inside and thus named after a planet)? 172.68.143.76 19:16, 21 March 2021 (UTC)

Population Specific rather than Vote by County[edit]

Existing explanation is assuming that the joke is purely about the means of showing electoral votes by county regardless of population in terms of red/blue. There is no indication in comic or title text that this is the case. Instead, a more direct take on 2439 is that this is taking the population cartogram to the extreme level of the solar system. A good example of the world view population cartogram is Population Year 2020 | Worldmapper. In this view, regions with larger population densities are shown to be larger than rural areas, yet still having the general shape of continents. To correlate with this, in Population Year 1 the comment is made "The estimated population of New Zealand was zero", yet New Zealand is still clearly visible on the map, just razer thin (to line up with a single dot for all of the other planets). With all of the above, I believe the paragraph relating 2439 to the US Election Vote by County views is not relevant to the comic, other than it being a misinterpretation of the comic. In terms of content, worldmapper.org content is CC BY-NC-SA 4.0, so the image could be included. 172.68.132.69 20:58, 21 March 2021 (UTC)