In the first part, a four frame strip along the top, Ponytail and Cueball discuss how Cueball's date went. When Cueball answers Ponytail's question with "second base", Ponytail asks what that means exactly. They fumble around with the definition in panel two where Ponytail ask is that Below the waist, but... not under the clothes? Cueball tries to put this into the base system and suggest that this could be compared to the difficult shortstop fielding position in baseball, between 2nd and 3rd base. This fits with the position of Hands on the pants metaphor from the picture below the comic strip. Then Ponytail begins with yet another base analogy by mentioning crossing the pitcher's mound, but then suddenly she brings two more, very different, sports into the metaphor: American football (with the 50 yard line) and bowling (with the ten-pin). It certainly sounds tricky, as Cueball says. Ponytail then brings up a third sport in her elaboration; her reference to getting a "red flag" could refer to different sports, as many sports use flags, some of them red. It is, however, most likely a reference to racing in motor sport as the red flag is displayed when conditions are too dangerous to continue the session. This makes sense when looking at the "translation" here below. Cueball, however, has not got a clue which he expresses when Ponytail asks him If you know what I mean. (Note that this comic came out less than a week after Super Bowl XLIII, the final game of the 2008 NFL season, which was played on 2009-02-01).

This would mean that Ponytail was about to go down on another girl, while this girl had her period. Many people would find it disgusting to go down on a girl while she was menstruating, explaining why Ponytail brought it up when Cueball said Sounds tricky. However, Cueball doesn't seem to understand Ponytail's metaphors, explaining his replies of Sounds tricky and I really don't.

The second part, the diagram, depicts a much more complex version of the baseball metaphor, where baseball terms and jargon are used to describe the many and varied things human beings like to do in the bedroom. Explanations have been separated by position. In order to understand the terms used, one may want to consult this picture: 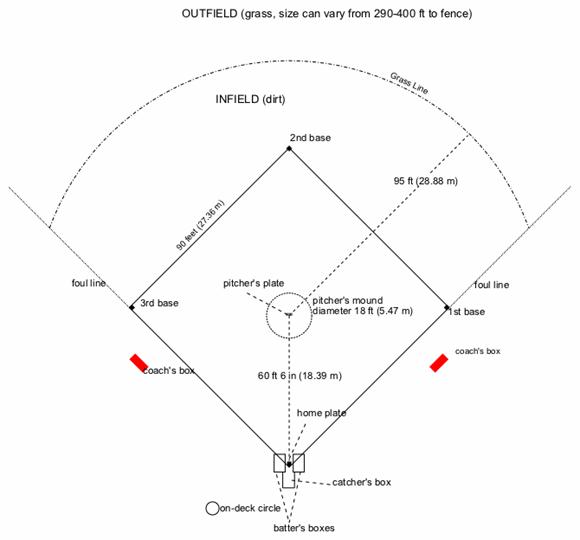 Note that Randall did not include any features from within the diamond; the pitchers mound or plate.

The "diamond" is the geometric pattern formed by the four bases - first, second, third, and home plate. Through the course of one side's turn (half of an "inning") players have a chance to move from one base to the next base in line: from first, to second, to third, and finally to home plate (scoring only if they make it to home plate). Thus there is a "progression" from one base to the next of sexual activity in the metaphor, until climax is achieved (getting to 'home plate' and 'scoring a run'). In both cases, players can be removed before making it to the next "base" in the sequence.

The entries in this section are ordered roughly from home plate to first, to second, to third, and then to home plate again, in the counterclockwise direction that the players move.

Within the diamond and around the orgasm line[edit]

Inside the diamond, at the center of the mound, is the pitcher. Several odd positions are placed here in Randall's diagram.

The infield is the part of the baseball field which is inside the baserunning paths (not inside the lines between the bases, because baserunners are allowed to run a certain distance outside those lines).

A foul ball occurs when a ball ends up in foul territory which is outside the foul line extending from either side of the diamond, the area is "out of play". Anyone who takes the ball into this area has committed a foul, and as such breached one of the acceptable rules of sexual conduct in the metaphor.

If you are together with a basketball player and then tell her that you are now at second base, she might become very confused as bases are not an element in basketball. Also there is the joke that basketball players never get laid because they always jump before they score.

[At the top there is a four panel regular comic strip.]
[Cueball and Ponytail are talking; Ponytail is sitting on the back of a chair with her feet on the seat, and Cueball is sitting on the floor facing her.]
Ponytail: So how far did you get with her?
Cueball: Second base?

[Zoom in on Ponytail on the chair.]
Ponytail: Wait, which one is that? Below the waist, but... not under the clothes?
Cueball (off-panel): I think that's... shortstop?

[In a frameless panel, Cueball now almost lies down and Ponytail is sitting on the armrest of the chair.]
Ponytail: You should try crossing the pitcher's mound. Then down the 50-yard line, and right past her ten-pin.
Cueball: Sounds tricky.

[Again a zoom in on Ponytail now on the armrest.]
Ponytail: Yeah. Last time I tried it, I got a red flag. If you know what I mean.
Cueball (off-panel): I really don't.

[Below the strip there is a large frame with a diagram of a baseball diamond.]
[At the bottom left there is a box with tis text:]
The "Base" Metaphor Explained

[Bases are pointed too with thick black arrows (except home plate) and there are also arrows pointing to different parts of the diagram. All arrows and points marked with "x" have a description, as do the dashed lines covering the field. Below they will be listed anti-clockwise from the home plate.]

[Along the line towards first base is the following five items in the order they appear:]

[Black arrow pointing to first base:]

[Further along the line past the first base is one x point in the right outfield:]

[On the way towards second base there are the following two items:]

[A region along the line from first to second has been marked off by a dotted line. It has the following text written inside:]
The boring zone.
[x some way inside the line next to the boring zone:]
Using the scroll thingy on that one Apple mouse

[Black arrow pointing to second base:]

Second base: Hands under the shirt and/or licking

[On the route from second to third base are eight items:]

[In the left outfield there are two x points:]

[Foul of the third base line just left of where the grass line divides the in- and outfield:]

[Black arrow pointing to third base:]

Third base: Oral sex (formerly "hands in the pants")

[On the route from third to home plate there are four items:]

[Between third base and home there is a dotted line that makes a curve from right outside the third base line and ends right afer it has crossed the orgasm line. The text is written inside the diamond with the first word above and the other two below the dotted line:]
"Virginity" (Maginot) line
[A large black arrow curves around the end of the "Virginity" line outside of the diamond:]
Teens
[A large black arrow points from outside the diamond to a point right between home plate and the virginity line:]
Sharing root PWs
[x just before home plate at the end of the orgasm line inside the diamond:]
Thigh contact

The arrow indicating Napoleon's forces may be a reference to the classic map/diagram by Charles Joseph Minard, which shows not only the path Napoleon's army took on its Russian invasion, but also several other relevant categories of facts about that campaign, thus folding several conceptual dimensions into two. (sorry, should have signed this.) 108.162.219.209 07:44, 6 November 2013 (UTC)

This image is originally from Wikimedia Commons, and has been released into the public domain. Therefore your use is legal. --Troy0 (talk) 05:13, 25 July 2014 (UTC)

It says under the passing notes thing that it's for students with an interest in the opposite sex, implying that only heterosexual students pass notes. Not really a big deal but it just annoys me.103.22.201.75 13:16, 4 September 2014 (UTC)

The explanation says that the meaning behind the base 2 label is unknown. As far as I see it, the fact that binary uses base 2, and the base is labelled base 2 written in binary is a clear and obvious meaning. --Pudder (talk) 11:49, 12 September 2014 (UTC)