For any task you might want to do, there's a right way, a wrong way, and a way so monumentally bad that no one would ever try it. How To: Absurd Scientific Advice for Common Real-World Problems is a guide to the third kind of approach. It's the world's least useful self-help book.
—Randall Munroe, Source 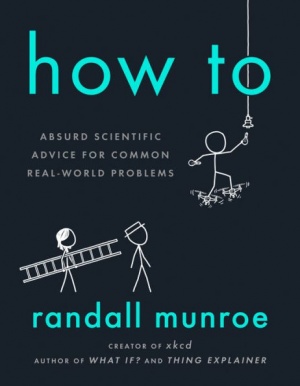 How To: Absurd Scientific Advice for Common Real-World Problems is a book by Randall Munroe.

Randall explains it this way: "It describes how to cross a river by removing all the water, outlines some of the many uses for lava around the home, and teaches you how to use experimental military research to ensure that your friends will never again ask you to help them move."

The book became available on September 3, 2019. However, he began promoting it in the xkcd Header text at the top of the comic on February 2019. Since then, the header has most of the time been a promotion for the book.

A month before the release, he made an entire comic about the book (not a real comic but a temporary one-day comic): Disappearing Sunday Update.

Also a month before the release, he wrote an article in the New York Times promoting his book which featured excerpts from the chapter “How to Predict the Weather” titled “What Makes a Red Sky at Night (and at Morning)”.

Three weeks before the release, he made a permanent comic and blag entry about a chapter in the book with 2190: Serena Versus the Drones.

One week before the release, he made another permanent comic and blag entry about a chapter in the book with 2194: How to Send a File.

Ten days after the release, Time (magazine) wrote an article featuring excerpts from the chapter “How to Produce Energy” titled “This Comic Creator Hopes His Terrible Ideas for Producing Energy Will Inspire You to Think of Better Ones”

The book has its very own page on Wikipedia: "How To: Absurd Scientific Advice for Common Real-World Problems" 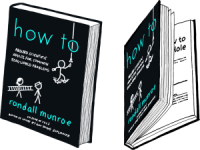 These only have a short comic strip instead of a detailed explanation.