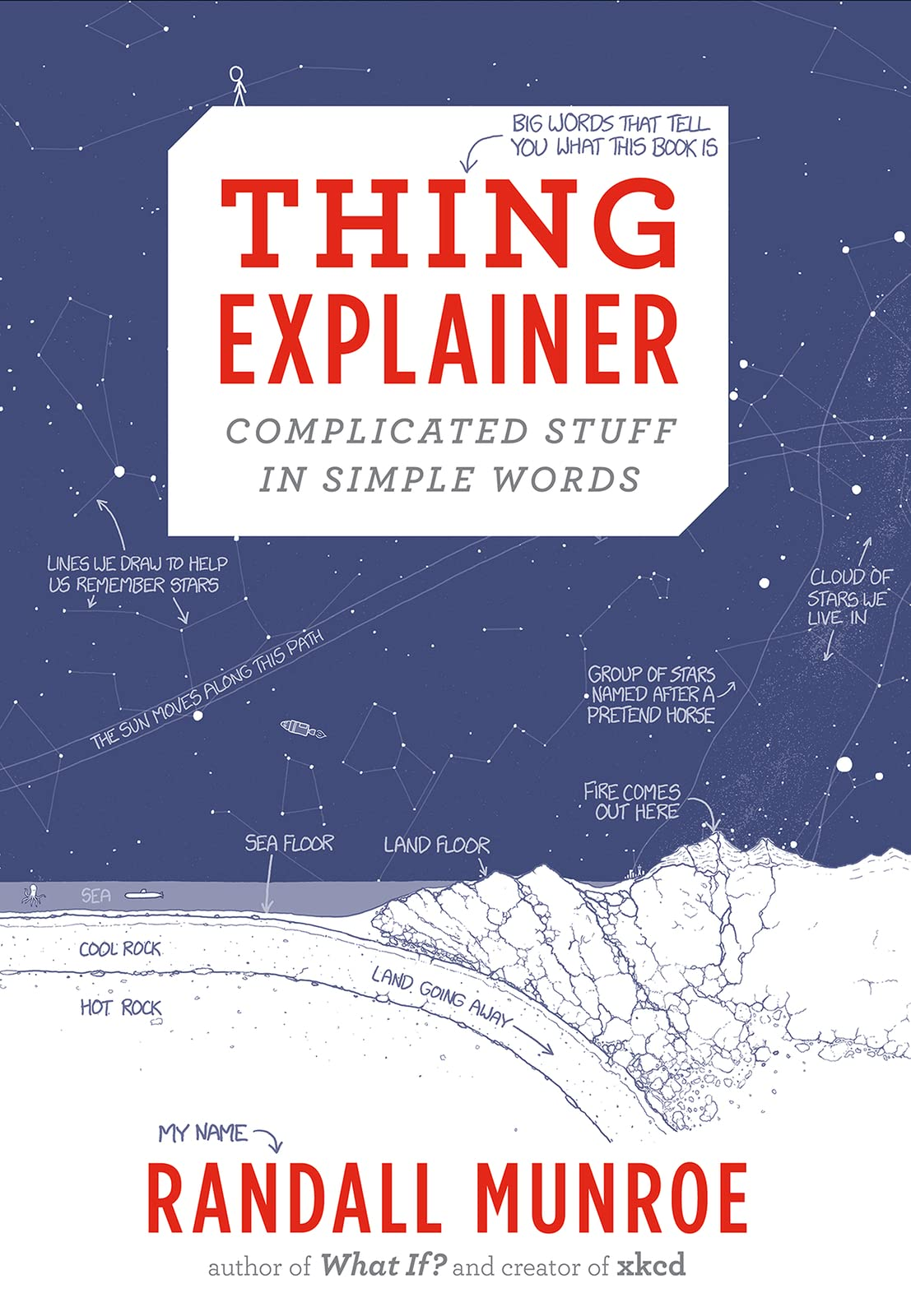 Thing Explainer: Complicated Stuff in Simple Words is a book by Randall Munroe where things are explained in the style of Up Goer Five (which is also included in the book), using only blueprint like drawings and a vocabulary of the 1,000 (or ten hundred) most common words in the English language. Randall found his own method to determine which words would go on his list, a list that is revealed in the book. (It can also be found here.)

The book explores, among other things, computer buildings (datacenters), the flat rocks we live on (tectonic plates), the things you use to steer a plane (airliner cockpit controls), and the little bags of water you're made of (cells). See a summary below and also the entire index from the book listing all the 45 different explanations.

Thing Explainer is Randall's second published book, not including xkcd comic books, which he announced on May 13th, 2015 in the blag following the amazing success of his what if? book based on the what if? blog.

The book is a collection of diagrams and line drawings similar in style to the Up Goer Five comic, which can also be purchased as a poster. It was published by Houghton Mifflin Harcourt on November 24th and is available from among others Amazon to which a link has been posted on xkcd for a long time.

When the book was released Randall had Minute Physics do a "commercial" version of the Upgoer comic.

On the day of the book's release (even though it was a Tuesday) Randall also released the comic 1608: Hoverboard, which was a direct celebration of the book's release (it says so in the comic). But it was far from being a small or normal comic! It was the first "real" game comic released on xkcd (albeit not the first interactive comic). In the style of 1110: Click and Drag it was possible to move around in a very much larger picture than what was shown in the frame. But this is not done by clicking and dragging though, instead the user controls Cueball on a hoverboard (hence the title of the comic) by using the arrow keys, assuming that the user is on a desktop computer or a laptop. If they are on a mobile device such as a smartphone, Cueball is controlled by tilting the device.

There are many themes and references throughout the game, but the two main themes are Star Wars (the largest part to the right part) and The Lord of the Rings to the left. Several references goes back to the book from this comic. These are listed in the explanation for the hoverboard comic.

On the release day Randall also released a simple writer that would only accept the thousand words listed at the back of the book under The ten hundred words people use the most. In this way others can try to create simple explanations themselves.

Have you ever tried to learn more about some incredible thing, only to be frustrated by incomprehensible jargon? Randall Munroe is here to help. In Thing Explainer, he uses line drawings and only the thousand (or, rather, “ten hundred”) most common words to provide simple explanations for some of the most interesting stuff there is, including:

How do these things work? Where do they come from? What would life be like without them? And what would happen if we opened them up, heated them up, cooled them down, pointed them in a different direction, or pressed this button? In Thing Explainer, Munroe gives us the answers to these questions and so many more. Funny, interesting, and always understandable, this book is for anyone—age 5 to 105—who has ever wondered how things work, and why.

Things in this book by page (Contents)[edit]

Below is the complete index of the book called Things in this book by page. First is the simple title listed. Then follows the translation of this to normal language in brackets, with a wiki link to the most relevant page, based on the books material rather than the actual title. After "…" follows the page number for the start of that title as listed in the book:

There are 45 entries, but with the introduction, the list of used words and the acknowledgments taking up three, the total ends up at 48 explanations.

"Wait
Why is this in your house?"

Cueball can be seen on the cover overlooking some of the labeled pictures. It was thus already early clear that the book would explore the themes labeled on the front cover which includes astronomy, constellations, and geology.

There are several funny "explanations" on the cover, like labels on arrows pointing to the title and to Randall's name explaining that this is:

The back cover of the book was also available: 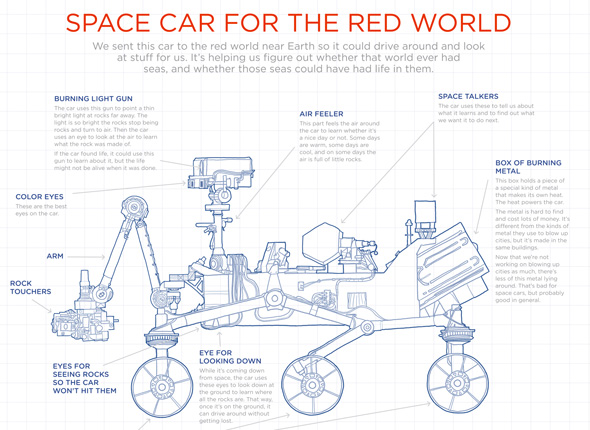 Promotion at the xkcd home page[edit]

Part of the fun of reading the book is finding out what 'complex' word the simple word phrases are encoding. For example, the International Space Station Supply vehicle described as 'bird' is Cygnus, and the one described as 'Pretend Fire Animal' is Dragon.

I put in the promotional picture. If someone could make it appear smaller I would appreciate this. I'm not sure how to do this without changing the file's resolution. Which I do not wish to do. It should be possible to see this version of the picture by opening the file. --Kynde (talk) 13:09, 4 December 2015 (UTC)

If the 1000 (ten hundred) word vocabulary is still too complex and you want to explain things in even simpler terms, you might take a look at the learnthesewordsfirst.com dictionary. It explains the 2000 most common English words using a set of only 360 words (the "semantic atoms and molecules" from the lessons). It is intended for 2nd-language learners, but interesting from the perspective of explaining things using reductive paraphrase. Lexyacc (talk) 23:31, 4 July 2016 (UTC)

I wish for explanations for Thing Explainer, using more words. For instance, when explaining cells, I'm not sure what is the "bag filler" (the Golgi apparatus? but does it make bags of death water aka lysosomes), the strange boxes (???), the empty pockets (???), the doping substances they produce (???). It also took me a while to guess and google what ships visited the ISS. There, the "big carrier from many countries" seems the European ATV (https://en.wikipedia.org/wiki/Automated_Transfer_Vehicle), but that flew to the ISS 5 times, not 4. Since I'm clueless and Munroe isn't, I must be missing something. --Blaisorblade (talk) 20:39, 7 September 2019 (UTC)

Hm, the empty boxes are probably vesicles and vacuoles, including secretory vesicles (https://en.wikipedia.org/w/index.php?title=Secretory_vesicles&redirect=no), used to make hormones including steroids. While I finally found this out, each time it takes googling and luck — googling the nontechnical terms fails; here I looked at https://commons.wikimedia.org/wiki/File:Animal_Cell.svg. --Blaisorblade (talk) 20:48, 7 September 2019 (UTC)