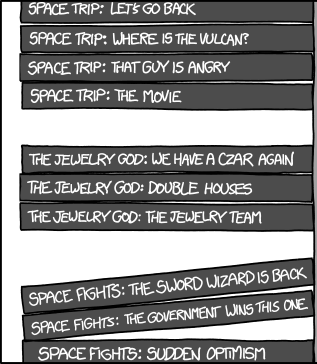 This comic shows several "Synonym Movies". It takes several well known movies, but changes each word of their names into a synonym. So Star Wars has turned into Space Fights, The Lord of the Rings into The Jewelry God and Star Trek into Space Trip. All these movies series have the same heading, and then a subtitle. There are ten of them in the comic, and two more in the title text. This comic became a series when more movies were spoofed in 1568: Synonym Movies 2.

The use of synonyms makes all these movies look ridiculous, for example, "The Sword Wizard Is Back" is a laughable sounding movie[citation needed], whereas "Return of the Jedi" sound perfectly reasonable to us. Randall may be poking fun at movies that have ridiculous titles already, for instance some people think this applies to a title like "Terminator: Genisys".

The title text refers to the latest Star Wars movie (2015-12-18), after Disney acquired the movie rights. The movie is called Star Wars: The Force Awakens and has now turned into Power Gets Up. As usual, with any Star Wars related material, there is a huge fan base that eagerly awaits the new movie. But then again many people fear that it will not live up to their expectations, as was the case with the fourth movie, first of the three movies in the second installment of Star Wars, Star Wars: The Phantom Menace, dubbed here as The Scary Ghost. As mentioned in the title text, that movie did not live up to the hype.

A similarly humorous effect is achieved in 1133: Up Goer Five which explains the Saturn V rocket, but words and phrases are replaced with synonyms which are chosen from the most common English words. This renders ordinary words like "rocket" into "flying space car", or "helium" into "funny voice air" for example.

SPOILER ALERT! Many of these explanations contain information revealed during the movie.

[Ten DVDs on a shelf. The first three stand together to the left, the two to the right leaning on the first. The next three are standing straight in the middle and then the next four are standing straight to the right. The movie titles are written on the back of the DVD cases, in white on the gray DVD cases. The text is written, so it is supposed to be read when the DVD is lying down.]
Space Fights: Sudden Optimism
Space Fights: The Government Wins This One
Space Fights: The Sword Wizard Is Back

[Caption below the frame:]
Synonym Movies

Funny, I always assumed it referred to Anakin, as it's the move where his sith side is freed and his Jedi side "returns".--141.101.98.163 11:59, 12 August 2015 (UTC)
Leia was never established as a Jedi - at least, not in the movies. There are only two places (both in Return of the Jedi) where it's hinted that she has any Force power at all: First, when Luke tells her that she's his sister and she says she's somehow always known, and second when Darth Vader divines her existence from Luke's feelings and suggests that she could be turned to the Dark Side. Neither of these scenes serve to establish her as a potential Jedi, so I don't think she could be reasonably included in OH WHAT THE HELL I'M SUCH A GEEK. KieferSkunk (talk) 18:57, 12 August 2015 (UTC)

Not enough of a geek. When Kenobi says "That boy is our last hope," Yoda informs him that there is another. This, combined with Vader's implication she can be turned to the Dark Side - something that is only ever presented as a concern for those with Force power - clearly indicates that Leia is a potential Jedi. Further, at the end of The Empire Strikes Back, she hears Luke "calling" for her, another indication of Force sensitivity. - Val

I would like to interject that Yoda's other hope is probably Anakin/Vader, who actually is the person who defeated the last (canon) Sith in existence. This also fulfilled the prophesy from the fantom menace.HisHighestMinion (talk) 05:50, 21 July 2016 (UTC)
I add another vote for plural. I believe it refers to the concept of Jedi which all but died out in the prequels (the only living Jedi were hidden and inactive). The film is about the Jedi returning both into existence and into... being active. TheHYPO (talk) 15:36, 13 August 2015 (UTC)

In German the title is "Rückkehr der Jedi-Ritter" which would translate back into "Return of the Jedi Knights" - Plural. So it is/was naturally plural for me, too. But, of course, German movie titles are no reference to the actual meaning. Since some years we occasionally use English titles in Germany, too. But somehow they are different to the original English titles... (No worry: Star Wars is Star Wars - but even that was translated in the 70's to "Krieg der Sterne") Elektrizikekswerk (talk) 09:50, 12 August 2015 (UTC)

In Latin America The Money Pit was Hogar, dulce hogar (Home, sweet home). Switch was Pasaporte al cielo (A passport to heaven). Trading places was De mendigo a millonario (From beggar to millonaire). It's absurd that they translate all titles twice. Xhfz (talk) 21:41, 12 August 2015 (UTC)

In Finnish, it's "Jedin paluu", which translates literally as "The Jedi's return", again in the singular. Star Wars is translated to Tähtien sota, which roughly means "The stars' war" (plural possessive). The Money Pit is Rahareikä, literally "Money Hole" (or "The Money Hole", Finnish doesn't have words for the, a, or an), Switch is called "Apua, olen muuttunut naiseksi" (roughly "Help, I'm a changed woman") and Trading Places is Vaihtokaupat (literally "Shops Swap"). 141.101.98.207 (talk) (please sign your comments with ~~~~)
My favourite example in Germany is "Once upon a time in the West" (as far as I can tell a direct translation from the Italian original) which is "Spiel mir das Lied vom Tod" in Germany: "Play the song about death/of Death to me" (don't know if The Death or just death is meant). This is one of the rare occasions on which I prefer the German title, while the English translation of the German title sounds quite silly, imho. However, back to topic: The word "Jedi" is used as plural and singular in each English and German (at least I'm not aware of ever having heard "Jedis" in either language). While in German it's quite easy to distinguish them by the article (Der (sg)/ Die (pl)) even that is the same in English (The). Elektrizikekswerk (talk) 13:04, 12 August 2015 (UTC)

Actually, the Italian title would translate to "Once upon a time there was the West". "Il ritorno del Jedi" implies one Jedi only. Red Lieutenant (talk) 07:54, 13 August 2015 (UTC)

Wikipedia does note that Czar had become a title equivalent to King by the 19th Century, so perhaps that ought to be mentioned regarding "We Have a Czar Again." 173.245.54.41 (talk) (please sign your comments with ~~~~)

Specifically, Цар, or "Tsar" would in Bulgarian and Russian mean the equivalent of (native) monarch, while Крал/"kral" would be reserved for foreign monarchs. When referring to an emperor, you'd use император/"imperator". Thus I would argue that "Czar", as the western spelling of Tsar, is a reasonable facsimile for "King". Meledin (talk) 14:11, 12 August 2015 (UTC)

Alright, now I'm going to try to do the DC and Marvel Cinematic Universes. Feel free to add or change if you think you could put something better in.

I had no idea what "The Jewelry God," meant, since that's a terribly mangled: "The Lord of the Rings" is of course a reference to the ring that rules all the other rings, as was made plain in the book. So "The Jewelry God" is backwards, and should have been "The God Jewelry." Mwenechanga (talk) 17:50, 8 September 2015 (UTC)

Commenting very late, but: not necessarily. Sauron is actually referred to as "The Lord of the Ring" in the book (by Gandalf). Nitpicking (talk) 15:35, 9 January 2022 (UTC)

I feel it would've been even better if he'd done word-for-word synonyms transcriptions, instead of phrase "synonyms", which are only synonyms if one takes the "-nym" literally, the full phrase being the movie's name. —Kazvorpal (talk) 17:06, 12 November 2019 (UTC)