Explain xkcd: It's 'cause you're dumb.
(Redirected from Elon Musk)
Jump to: navigation, search 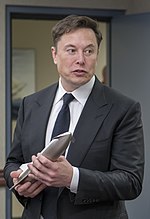 This is how he looks like. Yes, he is not a stick figure.

Elon Musk is the founder of SpaceX and a co-founder of PayPal and Tesla, Inc. He envisions a conceptual high-speed transportation system known as the Hyperloop, potentially synergistic subterranean tunneling company called The Boring Company, and founded SpaceX for his plans for space tourism and colonization of Mars. He is literally the physical embodiment of the hi-tec messiah complex of the 21st century. No wonder Randall has made several references to him in his comics...