Robert'); DROP TABLE students;--, nicknamed Little Bobby Tables, is the youngest son of elite hacker Mrs. Roberts. His elder sister is Help I'm trapped in a driver's license factory Elaine Roberts. His "full" name is known to cause problems with some computers. When he was first enrolled in school (327: Exploits of a Mom), it exploited a vulnerability in the parsing of students' names into the school's student database resulting in the school losing all the student records for the year.

In the five comics he is referenced he is only drawn three times. The first two is in the 1337 series where he is drawn as a Cueball-like kid. See picture above. But then he also appears as a young man with long curly hair, looking very much like a woman in 884: Rogers St. Here it is only the title text that reveals that this is Bobby, that and the fact that Randall in the official transcript does not mention the gender, but only that it is a person. Here is how he looks in that comic: 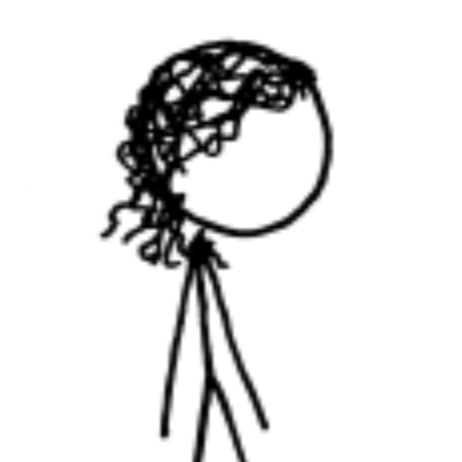 The first command inserts the name Robert into the database as in the first example. The second command however completely deletes the table students. The remainder is a comment to prevent syntax errors with the apostrophe and the closing parenthesis.

In French-speaking countries, apostrophes are a common character in street names. More often than not, French speakers unwittingly trigger SQL injection bugs when trying to order something from a US shop. In Italy, they are often part of town names, too (e.g. L'Aquila). Apostrophes are also found in a great many Irish surnames, often resulting in similar problems and/or data validation errors.

In 2020 the British corporate register accepted a registration for ""><SRC=HTTPS://MJT.XSS.HT> LTD", which was soon renamed "THAT COMPANY WHOSE NAME USED TO CONTAIN HTML SCRIPT TAGS LTD" to avoid a cross-site scripting problem. Discussion on the Companies House Developer Forum